The UART2PPM provides the bases for controlling PPM encoding for RC, robots, and drones through a serial UART. This encoder works with a broad range of supply voltages ( 3.3 to 5 Volts) allowing you to use a microcontroller's power supply in most instances.

The channel pulse length would be controlled by simple ASCII-character based commands send over the UART (parameters are 9600 8N1) thus allowing to control the PiKoder through a standard terminal program. For customizing your PiKoder for your application the most relevant parameters can be adjusted and stored in the PiKoder's non-volatile memory.

Besides this, the PiKoder/COM does also support the MiniSSC-protocol format.

This script demonstrates how to set the channel values using the Ascii Command Interface. The hardware setup is described in the User's Guide. 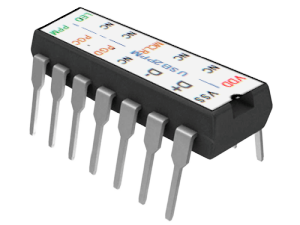