The PiKoder/SSC Serial Servo Controller controls up to eight servos through a serial interface. Alternatively the outputs can be switched to binary. You can connect e.g. your Arduino or Raspberry Pi without any additional hardware to the SSC. A USB-converter allows you to control the servos from your computer.

You can operate the PiKoder/SSC with 3.3 Volts. This eliminates the need for a dedicated 5 V power supply in embedded systems when other modules such as Bluetooth transmitters are used which require 3.3 V.

The PCC (PiKoder Control Center) with its graphical user interfaces provides for testing and customization of the PiKoder/SSC.

The User's Guide provides detailed information regarding the features and the application of the PiKoder/SSC.

This application note outlines how you can control up to 255 servos by daisy chaining PiKoder/SSC.

This script demonstrates how to set the channel values using the Ascii Command Interface. 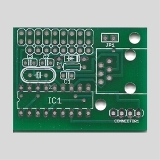